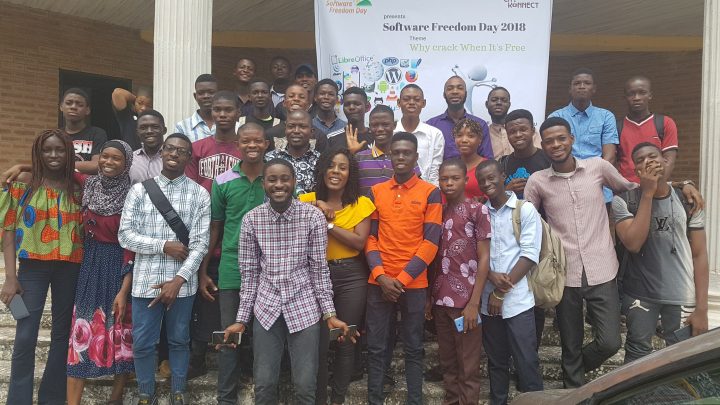 Eko-Konnect celebrated the annual Software Freedom Day – SFD on 15th, September 2018, to increase the awareness of free and open source software and encourage its use. The event themed “Why Crack When It’s Free” was held at Otunba Ajayi Okunnuga Hall, Lagos State University Ojo Campus.

During the event, Tomi Awosika, an Intern at Eko-Konnect and engineering student of the University of Lagos, gave a Presentation titled “My FOSS Experience” talking about her experiences and explained how she uses Free and Open Source Software (FOSS) as part of her campus lifestyle.

Olayiwola Lawal, an IT Support staff at Eko-Konnect presented “A Case For Linux” describing Linux and some of its distributions.

In his presentation of “GitLab in the life of a student” Pius Effiom, another staff of Eko-Konnect described the fundamentals of version control, the history of Git and GitLab as a tool for collaboration and source code management. A demonstration of GitLab showcased the functionality and importance of the tool.

Kafayat Adeoye rounded up the event with a demonstration of a surveillance system using a passive infrared motion sensor, a camera (picam) connected to a Raspberry Pi and a Finch Robot acting as-the surveillance intruder showing how relatively cheap devices using open source software can be used to build elaborate real-life systems.